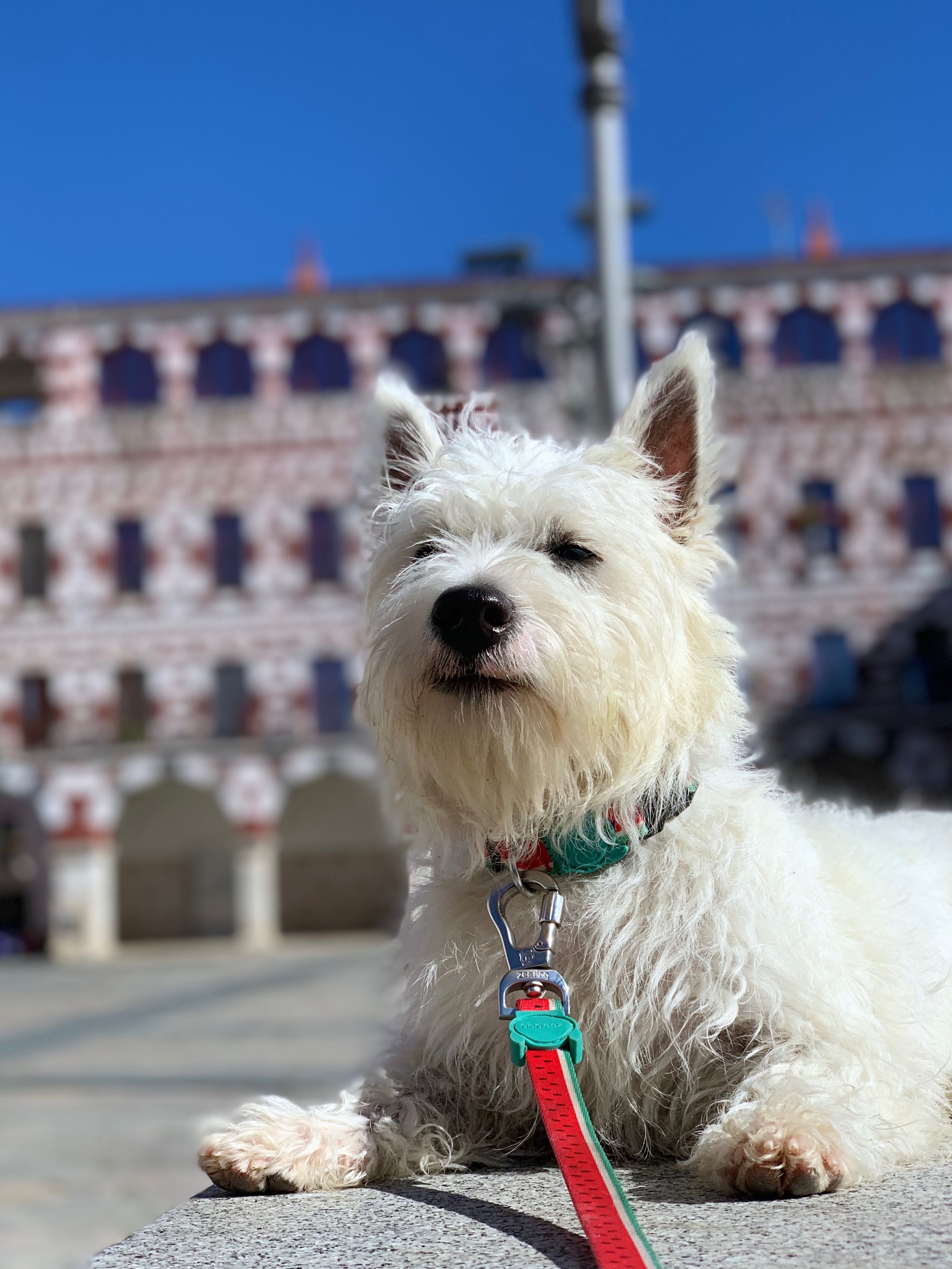 West Highland white terriers are known for being tiny-but-mighty dogs. They are also absolutely adorable. My neighbor down the street had a five year old Westie named Buster who clearly thought that the world was put into orbit just for him. This determined little dog would fearlessly chase after anything, no matter how loudly his owner called out commands. It seemed as if the owner did not even exist when this white speeding bullet put his mind to something. Recently, Buster wound up on my doorstep. My neighbor said, “If you want him, you can have him.” With that, I became Buster’s new servant- I mean owner. Watching him in action got me to wondering if all Westies are stubborn, or if Buster is just particularly headstrong. I decided to do some research on the subject.

Are Westies stubborn?While West Highland white terriers, on average, are easier to handle and a bit more friendly than other terriers, they are known for being stubborn and opinionated. Their high levels of self-esteem and strong willed personalities can make the proper training of these dogs a challenge, though certainly not impossible.

Are you ready to learn more about the stubborn streak common to this breed, how to deal with it, and some general characteristics of Westies? Continue reading. 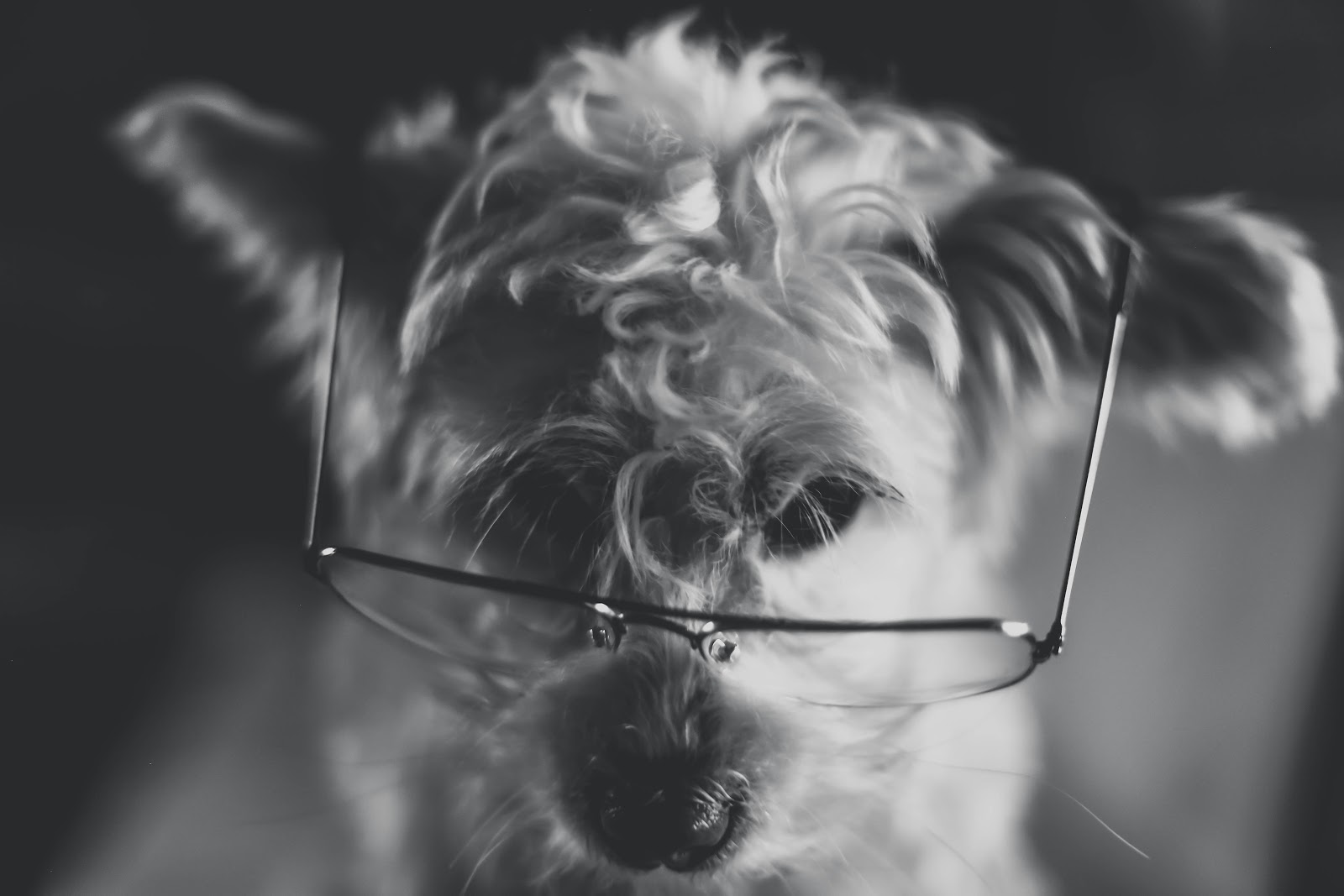 Westies, well known for being clever, brave, feisty and independent, are also admittedly famous for being a bit on the stubborn side. The, “What’s in it for me?” attitude that they are notorious for can leave owners feeling quite frustrated during training sessions. Unless a Westie decides that his best interests are at the heart of the matter, chances are this willful little dog will simply continue to do as he pleases, while totally ignoring the owner. I have read numerous stories about Westies suddenly putting on the brakes in the middle of their daily walk and absolutely refusing to budge. Tales abound of Westies who absolutely believe that they rule the world- and the household that they have overtaken!

My own cute Westie would not mind one little bit living in world free from the confinements of house rules. No begging, no lying on the couch, no digging to China and no incessant barking are all rules that are deemed to be trivial by my Buster. Perhaps if I had acquired Buster when he was still a puppy, convincing him that I am in charge, this would not be such an ongoing battle. There are times when he will come around to my way of thinking, but only if I have his favorite treat as a reward. Even then, it is not a sure thing. 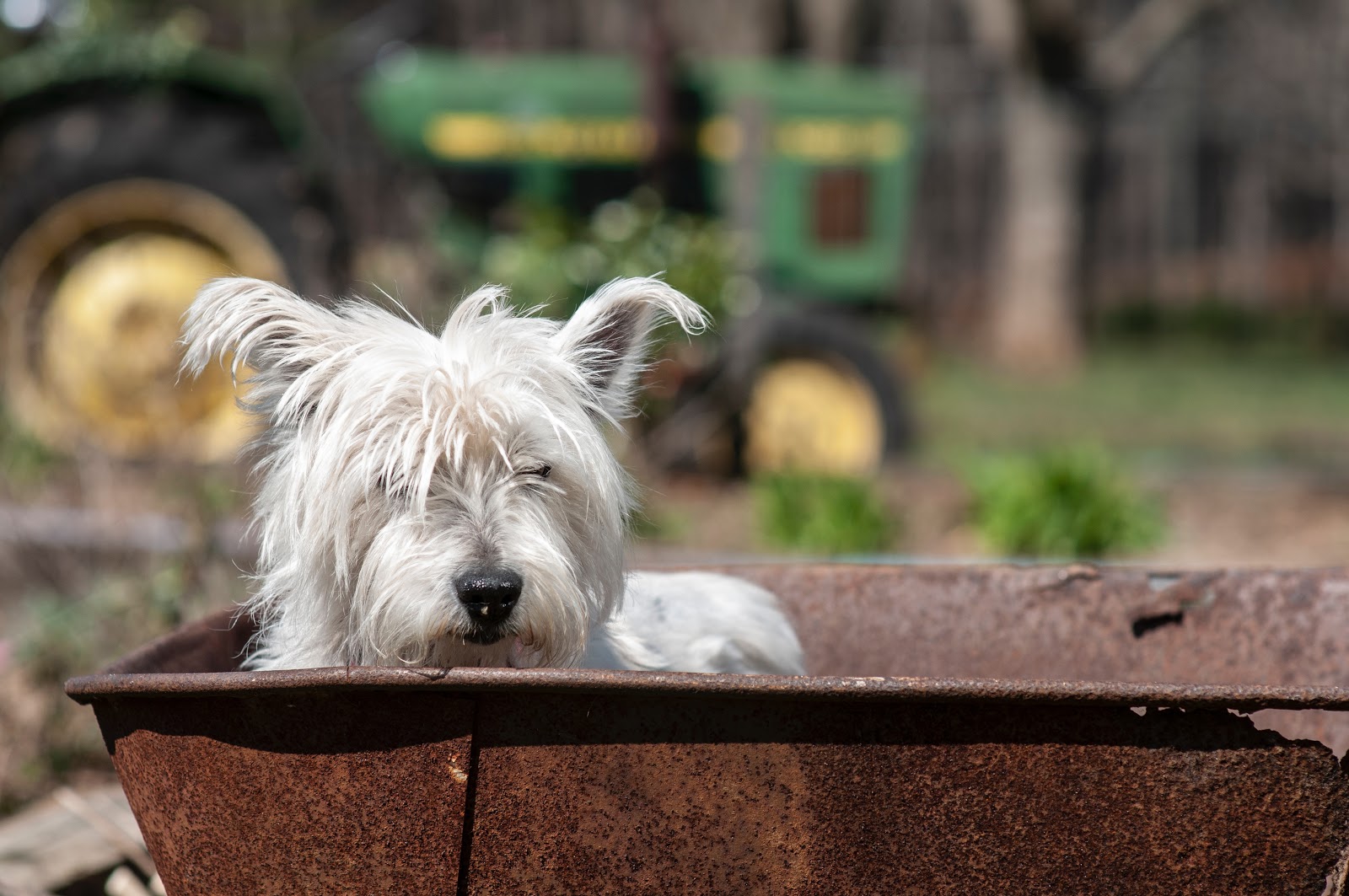 Now, I can certainly understand Buster stubbornly refusing to go outside when the temperature is well below freezing; however, some of his other refusals seem to have no logic whatsoever. The fact that he will not sleep in his own comfortable bed, but instead chooses to snooze on a pile of the kids’ toys makes no sense at all to me. He refuses to eat his kibble until I add a bit of water to it. If he does not feel like going for a car ride, there is no persuading him to change his mind. It is a good thing that he is small enough that I can easily pick him up! Do I love him any less because of his stubbornness? Of course not. His other awesome traits more than make up for his strong will. However,anyone considering making a Westie a part of their family should be aware of the stubborn streak that these white terriers are known for.

Why are Westies Stubborn?

West Highland white terriers hail from Scotland and were originally bred to hunt creatures such as foxes and badgers and to kill pests such as rats. They are tough dogs to be sure. In order to be capable of hunting and killing, these terriers were bred to be both tough and determined. They were bred so well, in fact, that these traits are still deeply ingrained in the breed even today. This hard wired determination is what is commonly referred to as the breed’s stubbornness.

Can a Stubborn Westie be Trained?

Yes. Training is certainly possible, as it is with any dog. Of course, every dog is different, but most will respond positively to training that involves food as an incentive. Don’t we all? From the very beginning, it is important that your Westie understand that you are the boss, and this is not to be negotiated. With consistent, positive reinforcements for good behavior, your Westie can become a well behaved little dog. One important exception is the ability to teach your Westie not to chase after little creatures. The incredibly strong instinct to hunt (and kill) prey is such a part of who they are that no amount of training will ever remove it. For this reason, a Westie should not be allowed to roam free. The possibility for disaster is simply too great.

If Westies are Stubborn, Why Have One?

While Westies can indeed have a stubborn streak, they are also intelligent, friendly, entertaining and energetic. Their playful antics are a delight to watch and their curious nature makes them hard to resist. Westies can be excellent family dogs, full of affection and loyalty. Families with young children may want to consider another breed though, as Westies generally possess little patience with tail pulling or fur grabbing and may snap at little fingers. They are great watchdogs, as they are quick to sound the alarm at the slightest noise. Full of energy, they are always finding things to keep themselves occupied, which can lead to some very entertaining situations! Overall, a Westie can be pure delight. 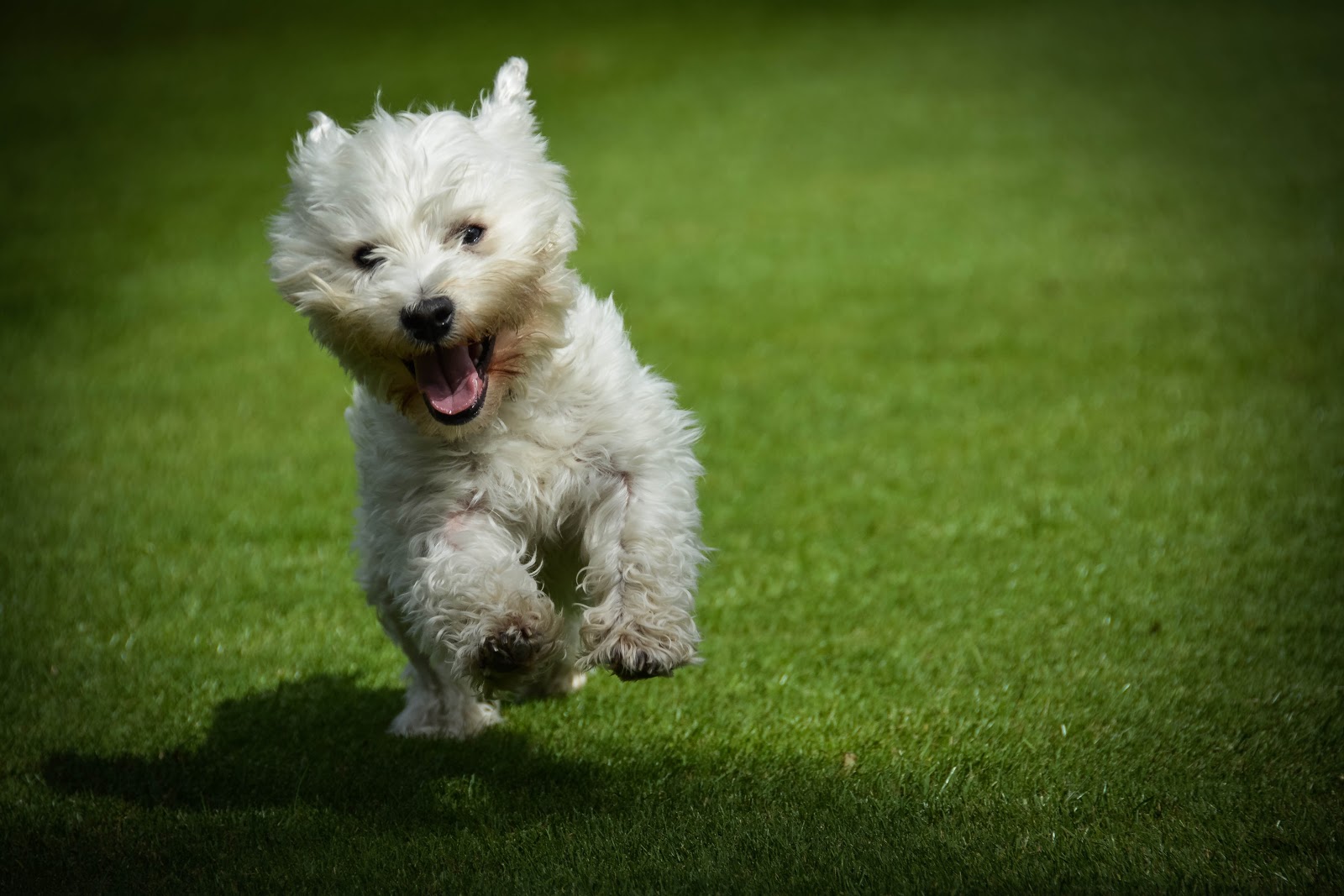 Most Westies do indeed enjoy digging. This love of exploring underground can be traced back to their original purpose – hunting. Bred to be relentless in their pursuit of small creatures and vermin, Westies are, by nature, diggers. The word terrier is actually derived from the Latin terra, meaning earth. Some people cordon off a section of their yard solely for the digging enjoyment of their dogs. If your Westie is a digger and you enjoy a nicely maintained yard, then this might be the solution for you. He can have his special digging spot, and you can enjoy the rest of your unblemished yard.

Unfortunately, yes, some Westies can be prone to barking too much. For example, if a Westie is left home alone all day, day after day, they may develop the bad habit of incessant barking. Most likely, they are simply barking out of boredom. If you must be gone for the day, leaving a radio playing or some toys for your dogs can help keep boredom, and the associated barking, at bay. Naturally, these dogs are quick to alert family members of any unusual noises. Proper, consistent training can quickly teach your dog that one bark is enough. After all, a silent watchdog isn’t much good, right?

West Highland white terriers can be a delightful addition to your home. If you are prepared to be consistent in training and to establish yourself as the boss, your Westie’s stubbornness can be overcome. The positive characteristics of the breed outweigh the stubborn streak by far.