A Westie and Jack Russell mix is ideal for families searching for a courageous, friendly, and independent dog breed. As a perfect combination of the traits of its parent breeds, this breed is highly intelligent, gentle, loyal, and has a high energy level. 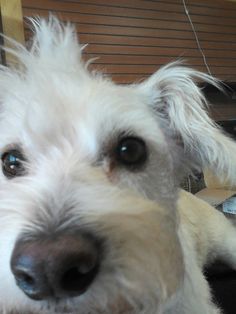 Another notable feature of a Jack Russell mix is that they have traits from both of their parent breeds, offering a unique appeal.

The History of the Jack Highland Terrier

Similar to other hybrid breeds, the Jack Highland terrier gets a lot of its personality traits from both of its parent breeds.

Originally bred in the United Kingdom in the 1800s, Jack Russell terriers were mostly used for rout-out foxes alongside foxhounds. As they have a much smaller physique, they could get into hard-to-reach areas far more efficiently.

West Highland terriers were bred with a similar purpose, as they also assisted with fox hunting as well as hunting small vermin, such as rats and mice.

With the combination of both hunting backgrounds, you can guarantee that your Jack Highland terrier will have a strong prey drive. As a relatively new hybrid, the Jack Russell terrier has yet to be recognized by the American Kennel.

What Is a Jack Highland Terrier’s Personality?

There are several personality traits your Jack Highland Terrier is likely to have, including gentleness, intelligence, friendliness, courage, affection, alertness, and independence. They may also excel in cheering you up on a gloomy day and keeping your kids entertained.

You’ll find that this particular breed is excellent with strangers; however, their strong prey drive isn’t ideal for small animals and cats. You must take the time to train your Jack Highland terrier as early as possible, as socialization is vital. Otherwise, their prey drive will take over, which can make them quite challenging to train.

Early socialization will make them fantastic partners for kids and other animals you may have around the house. You may also be surprised at the energy levels of this breed, as they are far beyond what you might be expecting.

Their amazingly heightened amounts of energy require constant exercise to prevent destructive behaviors that typically come with boredom. As they are quite playful, you’ll find they love spending most of their time playing and running around outside.

Another exciting feature of this breed is that they are innately curious. Jack Highland terriers love exploring different and unique scents as well as new animals they have never seen. Even while on walks, they’ll want to get into absolutely everything, as they love to explore their surroundings.

The Health of a Jack Highland Terrier

As a pet parent to a Jack Highland terrier, you must keep an eye on their health during all stages of development. There are several ailments that this breed is prone to dealing with, including craniomandibular osteopathy, keratoconjunctivitis sicca, and seborrhea.

There are a few different coat variations you can find with a Jack Highland terrier. Most often, they will have a white or black coat, which may contain markings of tan. You may also find breeds sporting a white, tan, and black coat, also known as tricolor.

Their coats are typically short or long, depending on the preference of their pet parent, though most have medium to long hair naturally. Their dense layer will require regular maintenance, especially as their texture is typically straight rather than wiry or wavy.

You’ll find that this breed of terrier usually has a stockier build, as they are quite muscular but may only reach up to two feet. You’ll also love how perfectly padded their paws are, which protects them from the elements outdoors.

By far, the most noticeable part of a Jack Highland terrier is how tall they can jump, as their hindquarters are where most of their muscles are found. This trait is quite typical of Jack Russells, as they are known for their springy steps.

How to Maintain a Jack Highland Terrier

There’s no way to determine whether your Jack Highland terrier will be hypoallergenic or not, especially as Jack Russells aren’t allergy-friendly like Westies. If your dog has a stronger influence of the Westie parent in them, their coats will shed substantially less, which will make them ideal for households with allergy sufferers.

When it comes to bathing your dog, you’ll be glad to know they truly only need to be washed when necessary. You’ll also find that brushing their coat is something you’ll need to do at least three times per week, depending on their activity level. If your pet prefers to spend most of their time outdoors, you may have to dedicate more time to grooming.

The most critical part of maintaining a Jack Highland terrier is to make sure they get regular checkups for their ears and teeth. This breed is particularly prone to periodontal disease as well as ear infections. Always ensure you inspect the area around their eyes as well, as you’ll want to keep away dirt and grime.

Your Jack Highland terrier will quickly become the most active part of your family because both pet parents are known for their high energy levels. On average, your terrier will need up to 80 minutes of exercise daily, depending on how much energy they have.

Otherwise, you’ll be opening the door for destructive behavior, thanks to their inquisitive nature. Training can also be a fantastic way to exercise your Jack Highland terrier, which will be essential anyway.

This breed is prone to digging and gnawing, which can be tough for your furniture unless you have the best dog beds for chewers. You will also want to make sure they have a safe and reinforced place to play in, as they love to dig beneath fences as well as jump over them.

As a breed that is phenomenal for keeping you entertained, a Westie and Jack Russell mix will quickly become a part of your family. With proper training, they can be loyal and reliable companions with a controllable temperament that is fantastic with kids and other pets.

You’ll also love their adorable small and stocky physique that sets them apart from different Westie mixes. Knowing everything there is to know about Westies and their amazing personalities can help you to understand your Jack Highland terrier better.

Here’s a video of a Jack Highland Terrier that was up for adoption and got adopted!