While our 10-month Westie is a purebred, does that really matter? Okay, to some it might, but to us, it didn’t. However, if you have a Westie and aren’t sure if he is a purebred, I am here to help.

So, what does a purebred mean anyway?

A purebred best friend comes with several expectations related to how the puppy Westie will look and behave.

Just take a look at Sami.

He has wide and muscular hindquarters with short, strong legs and a white double coat. He has a slightly domed head, tapering at the eye level and ears. When he is not barking, he has a serious look on his face with his jaw becoming more prominent. However, no matter how hard he tries to put on a serious face, his adorable black nose gives it away.

I adore his pointy ears, which stand up straight and are set midway on each side of his head. They aren’t spaced out too widely nor are they too close. No noise goes unnoticed by my very alert Sami. Another interesting thing about Sami is that when I got him, I saw that he had tiny hairs on his ears.  I do not trim the hair on his ears, but there isn’t any rule that says you can’t trim your Westie’s hair.

Oh, Sami’s eyes are a beautiful dark brown color. You can stare into them all day long. If your Westie has light colored eyes, it isn’t a big issue, but it isn’t exactly a desirable trait.

What other purebred qualities does Sami have?

He may be a small dog, but his teeth are larger than him. I examined his mouth and found out that his upper teeth overlap closely with his lower teeth, squarely placed within his jaw. So, I measured his tail for this post.

It is said that a purebred Westie’s tail is 5 to 6 inches long. Sami’s tail is around that length. It stands up straight and stands out from his body, but it isn’t perpendicular to his body…at least, it shouldn’t be continually.

When Sami moves, he flies. My Sami moves freely and easily, but if your Westie moves stiffly, it isn’t a desirable trait for a purebred Westie. My Westie has a double coat of pure white hair. The first time I touched his outer coat hair, it felt harsh, but his undercoat hair was soft. He shouldn’t have curly hair.

Still, you want to be sure, right? I have created a list of ways you can find out if your lovable and caring Westie is a purebred.

Not voicing my support for breeders, but if that’s where you’ve gotten your West Highland White Terrier from, most likely, the breeder handed you a pedigree. A pedigree contains the information of five generations of your pet’s ancestors.

Even though this is rare, some breeders tend to lie, informing the kennel club that a different dog sired the litter of puppies when they were from just one stud dog. If your puppy looks extremely different from Sami, go for a blood DNA test.

Don’t want to adopt a purebred Westie from a breeder? A shelter or a West High White Terrier rescue shelter is your best bet then. Your chances of adopting a purebred dog are high at a shelter because 25% of all dogs that enter local dog shelters are purebred. Fingers crossed!

If you’re not bent on getting a puppy, check out Westie Rescue USA to unite with your best friend.

Do you want an easy and accurate way to determine if your Westie is a purebred? You can get a DNA test done. There is a downside to getting it done though. It is costly, and it takes time for the results to return. Can’t you just get a DNA test done at home?

Even though you can perform a DNA test at home by using a cheek swab, the results may not be reliable and can take a long time to get back. I haven’t taken Sami to the vet for a DNA test, but if I were to, I would because even though it is expensive, it is more reliable than DIY DNA tests. Is there a less expensive way to determine this? Yes, there is.

You will find several kennel clubs, which offer breed standards for West Highland White Terrier. For those who aren’t aware of what a kennel club is, they are an organization that tracks the lineage of dogs belonging to different breeds. I wanted to learn more about Sami, so I went to a kennel club and learned about his ancestry.

Some popular kennel clubs include the American Kennel Club (AKC) and the United Kennel Club based in the United States. For my United Kingdom fans, you can check out the Kennel Club. These three organizations have established the standards for the Westie breed. 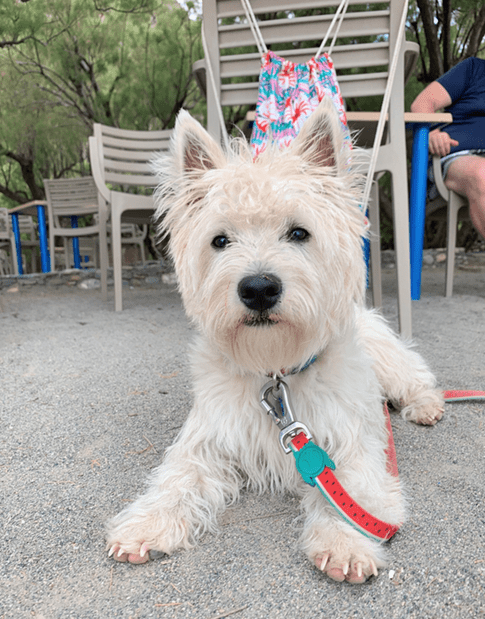 What If Your Westie is Not a Purebred?

If your Westie is not a purebred, it is perfectly okay. If Sami weren’t a purebred, my feelings for him wouldn’t change. Purebred or not, Sami would still be the dog who likes to pose for the camera, run into my arms, sit next to me, play with me, love me, and protect me.

For Sami, it doesn’t matter who his parents or grandparents are because I am his mom and he’s my child. It doesn’t matter if your West Highland Terrier’s ears flop or stand upright, he has dark or light-colored eyes, or his coat is straight or curly because, in the end, he’s your best friend.

So, don’t get disappointed if you learn your Westie isn’t a purebred because he is the same dog with a lot of love to give to his parent — you.