Sami is just 10-months-old. He’s still a wee little puppy! Now, I had the option to train Sami myself or go with the trainer route, I went with the latter. But you don’t necessarily have to hire a trainer and you can train your Westie yourself at home.

If you’re getting a Westie puppy and you want to train him yourself, I will share with you the training steps that will help him become a well-behaved and obedient dog. Just remember, don’t be too strict, but keep things light and fun. Most importantly, never ever lose your patience.

The 7 Steps to Train Your Westie Puppy 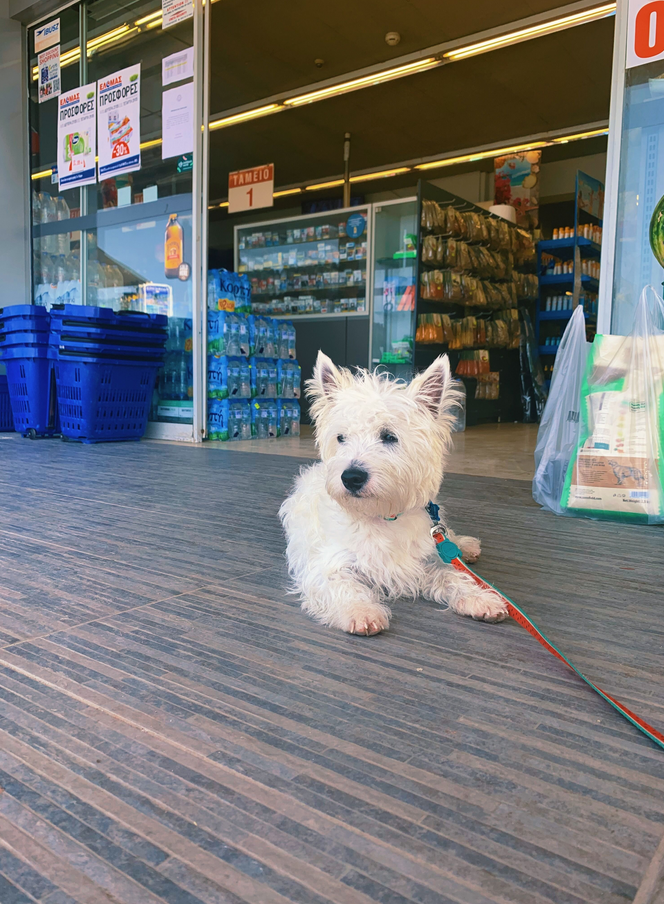 In each session, teach your puppy one command. Gradually, you can increase the duration of the training session as your puppy’s understanding of the training process grows. You can vary the commands as you go along as well.

Before you move to the second command, end the first command on a good note by praising his efforts and giving him a treat. Train your puppy in a quiet location without any distractions, as dogs tend to lose focus quickly. As your Westie learns the commands, take him to a location such as a park where there are several distractions and train him there.

Basic obedience commands include “Sit,” “Down,” and “Come.” These were the first commands my trainer taught Sami and I also practiced at home with him. As a reward for listening, give him a treat. Practice the “Sit” command by holding the treat in front of his nose, but above his head, so he can’t reach it. He’ll try to get the treat and will sit down when he can’t get it. That’s when you should praise him and give him the treat.

The next command to teach your Westie is “Down.” Hold a treat in front of your puppy when he’s sitting down and say, “Down.” Hold the treat closer to the floor, but pull your hand back. This gives your puppy enough space to go down and take it.  When your puppy goes down, praise him and give him the treat.

Teach your puppy to “Come” by giving him a treat for listening to you when you call him. My trainer told me to practice this at home and told me to start indoors before moving outdoors. For a few months, I practiced this command indoors before going to the park and then the beach. Just always have treats on you, so you can give him one when he listens to the command. Practice at intervals when you’re outside with him.

Step 5:  Train Your Westie to Use a Crate

A crate is a ready-made den and several types of crates are available, so you can choose one that meets your requirements. Sami has a crate where he rests and sleeps in, but most of the time, he’s sleeping with me.

If you want to train your puppy to use a crate, place it in your room or in any room where your puppy spends most of his time in. Place treats under his blanket in the crate. This will encourage your dog to go in the crate. The commands you can use to make your puppy go to his crate are “Crate” or “Sleep.”

When your puppy goes into his crate, praise him and give him a treat for listening. However, you should never scold your Westie and use the crate to punish him, as it’s not for that. I started training Sami for the crate when he was 6 months and older.

Never train puppies for the crate when they are under 6 months. When I trained Sami, I made sure he did not spend over 3 or 4 hours at a time in the crate. The same rule applies if you’re training an adult Westie.

Step 6:  Tell Your Westie to Go to the Bathroom Outdoors

You don’t want your puppy to do his business in your home or in the crate. You’ll need to train him to go outdoors when he has to use the bathroom. To train Sami to use the bathroom outdoors, my trainer told me to take him to the same place every two hours.

Generally, Westie puppies have a small bladder and will need to use the bathroom a lot, so accidents are prone to happen. You can also train your puppy to use a part of your home with dog potty pads.

Step 7:  Train Your Westie to be “Quiet”

Westies love to bark, hence making this command an important one to teach him. Trust me, there’s no Westie owner who will say that their Westie does not bark excessively. You can curb that behavior by teaching them the “Quiet” command.

To train him, ring the doorbell or knock on a wall to make him start barking. After your Westie barks a few times, pause, and then say, “Quiet.” Give him treats to keep him silent. Do this several times each day and you can even do it during other training sessions.

Oh, and never yell or use harsh leash corrections. If you want your puppy to repeat a certain type of behavior, reinforce it by giving him a few treats. Your puppy is like a child. It will take him some time to learn, but eventually, with continuous training, he’ll learn and be a good boy for you…not always, but most of the time.

If you don’t have time or the patience to train your Westie puppy, find out about the obedience training classes being offered in your area, which is what I did when I was trying to find Sami a trainer.