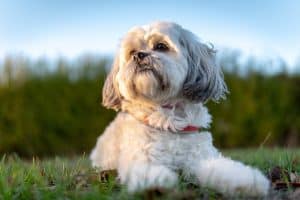 If you’re like most people, you’d like to own a dog. They’re great companions, love you unconditionally, and can bring excitement to your home. Often, you’ll find that it’s hard to pick the right breed, especially when there are so many available.

The Westie vs Shih Tzu debate has long-since raged on, but we have chosen to tackle that question. You will learn about each breed and find out more about their characteristics and potential health concerns. This will allow you to make a more informed decision.

Both breeds are purebred and hypoallergenic. This means that they don’t shed too much and aren’t as likely to trigger your allergies. They also both have similar lifespans of between 10 and 16 years.

Often, both dogs are friendly and good with children and other pets. They may also both work well with strangers, though the Westie does have a bit of a temper and might bark at anyone new.

Generally, both the Shih Tzu and West Highland White Terrier have a dense coat, which requires brushing frequently. Neither animal sheds much, which is part of the reason they’re considered hypoallergenic.

However, the issue can clearly be seen when it comes to grooming needs. The Westie requires a lot of maintenance, such as frequent washings and brushings. The Shih Tzu needs professional grooming to stay in the best condition possible.

You’ll also find that the Shih Tzu comes in many colors. These include silver, brindle, blue, black, red, and gold, while the Westie is a pure white dog.

You will find that the Westie is quite courageous, affectionate, independent, friendly, and alert. It also has average intelligence, which is ideal for obedience training. They can also pick up on your moods and tend to be boisterous when you’re down or sad to help you perk back up.

Since this breed is quite playful, they also have a lot of energy. Therefore, you may need to exercise them regularly and give them a lot of attention. They are affectionate, too, which means they will shower you with kisses and jump when they’re happy.

The Westie is quite sensitive, though, so it doesn’t like to be yelled at. Instead, you have to deal with them patiently and use kind, soothing tones.

Of course, this is a highly vocal breed; they like to bark at anything, including things they see outside. Thus, it is imperative that you get them trained to stop voicing their opinion as often. You can do this by offering treats as positive reinforcement.

When it comes to the Shih Tzu, you’ll find that they are lively, friendly, courageous, and active, but they do have a low degree of intelligence. They can still be trained, which is easy to do, but it will take time and effort.

If you want a dog you can play with all the time, this one might not be the best. It’s still playful at times but not as much as the Westie. Nonetheless, they’re highly affectionate and loving toward their owners.

Of course, this dog isn’t very sensitive, especially when compared to the West Highland White Terrier. Its emotional level is average, so you can reprimand them when needed, but it’s still a good idea to be kind and compassionate.

Primarily, this breed is also quite vocal. They will bark at almost anything. While you can keep them in an apartment, it’s best to focus on vocal training to reduce their need or desire to bark all the time.

The one thing you’re most worried about is how your Westie will get along with children, other pets, strangers, and others. Of course, they are well-known for being friendly to everyone, which includes strangers, but they may still bark when someone is unknown to them. You’ll also find that these animals are kid-friendly. Do note, though, that they might like to nip or play-bite when young, so caution is warranted.

If you’re an animal lover, you may want multiple pets, so it’s good to know that the Westie can be friendly to cats and is highly amiable to other dogs. Retired and elderly people will find that this breed comes highly recommended because they are relatively easy to care for and make good companions.

When it comes to the Shih Tzu, you should know that they aren’t the most child-friendly dog out there. If you have young children, it might be better to go with another breed. It’s not that they are dangerous, but they don’t understand the need to be careful around them.

Generally, these animals are friendly toward strangers, but they are likely to bark when meeting someone new. This is normal for many breeds, and most people can quickly quiet down their pets.

If you’re someone who wants a lot of pets, this might be the best choice for you. Shih Tzus are highly cat- and dog-friendly, so they will get along with other furry friends of the family.

You should be aware that this breed isn’t ideal for elderly people because they do require a lot of maintenance. It can be too much work for an older person to handle.

Though both breeds are relatively healthy, they can both fall victim to certain diseases. The Shih Tzu can develop dental disease and breathing problems as they get older. Hence, it’s important to keep their lungs exercised and teeth brushed.

Retinal dysplasia and other eye problems are often likely. With age can come significant back problems, which can cause them to stop playing and running. Likewise, pain might occur while trying to do normal activities.

You’ll also find that the Westie has a variety of health conditions to which it is prone. These can include distichiasis, ear infections, and hip dysplasia. Patellar luxation and keratitis are also concerning.

When it comes to the Westie vs Shih Tzu debate, it’s a tough decision to make. Becoming more informed is the best way to handle things. You get to learn more about each breed and will make a better decision based on that information.

We believe that the Westie is one of the best breeds out there, especially when compared to the Shih Tzu. These dogs work well with others, including pets, children, and the elderly. When you decide to get a Westie, make sure you learn more about various products suited for them.